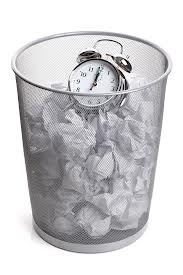 Wrong bin! Not even recyclable!

Where did the time go?

It is a question that I often ask myself as the calendar flips over to a New Year. And it is a rather ironic question, given that I spend most of the 365 days of the preceding year trying to hurry time along.

As a father, I sometimes foolishly wish time could fly. Fly so that my two boys would reach an age that requires less of my time, and frees up more of it to pursue a bucket list of interests.

As a runner, I continually wish time could accelerate. Accelerate during the interval between race A and race B, so that I can race and see the progress I’m making in this little hobby.

And, as a working man, I constantly wish time could expedite. Expedite in order for weekends to come around faster, seasons to go pass quicker and holidays to arrive earlier.

It is only when December turns to January, or when a certain day in September moves to the next, that I wish time could stand still – long enough so that I can recover from the astonishing speed at which it travels.

While never been one to believe in New Year’s Resolutions, it is in times like this that I can see how a person can easily succumbed to making such promises. And what better time than at the beginning of a calendar year to redeem for the sins of the past, wipe the slate clean of indulgences and commit to a better version of one’s self?

More importantly, what better reminder than the 1st January to stop wasting the one thing in life that never stops. A precious commodity that never looks back, but relentlessly marches forward. One whose perpetual motion pays absolutely no regard to money, religion, emotions and, indeed, any other man-made inconveniences that clog up our lives like fallen hair clog up shower drains.

In fact, in an increasingly flippant world, Time is arguably the most dependable bedrock there is … one that you can set your watch to, so to speak.

And listening to the countdown to the New Year yesterday with a stiff drink, I couldn’t help but rue the time that I have wasted over the past 40 years of my life. Putting on my “Glass Half Full” façade, I should have poured myself another drink for what I have achieved to-date, despite the wasted time.

But yesterday, on what is perhaps the most festive of days, I was in more of a mood to say to myself: “Fuck Glass Half Full! I WANT TO dwell on the empty half of the glass!”

Then, almost as abruptly, I admonished myself by saying: “YOU UNGRATEFUL FUCK! Snap out of it before something happens to make you really feel sorry-ass about!”

Lament versus Gratitude … Half Empty versus Half Full … Jack Daniels v Soda.

Whatever emotional conflict that was going on in my head as the New Year began, Time just kept on moving forward uninterrupted.

It didn’t stop to put its arm around my shoulder, hand me a beer and say: “It’s alright mate, take it easy and let’s get through this together.” Nor did it scold me with a “JUST TOUGHEN UP, YOU FUCKIN’ FAIRY!” speech.

No, Time did not even pay me a sideways glance.

And since it looked like I was never going to get a ‘Time Out’, I indeed decided to toughen up. Time was not waiting around, so I decided to stop wasting it around.

In other words, after years of ridiculing people who make New Year’s Resolutions, I decided to make some myself for 2014. And I did so because I don’t want, in a year’s time, to ruefully ask once again: “Where did the time go?”

17 thoughts on “Time to stop wasting it”