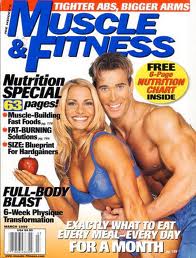 If you buy this magazine, you’ll get a girl like this with the apple thrown in for free

I sometimes splash out and buy one of those fitness magazines.

These usually stand out on a cluttered newsstand because their covers always feature an incredibly muscular man, with an incredibly beautiful babe hanging off his arm. I take it the subliminal message is: “Buddy, if you want a chick like her, you better buy this magazine and get buffed like him“.

And these magazines are not cheap. The particular title that I occasionally buy costs $8.95 a copy.

For that amount, I can get 2.5 regular-size cups of soy flat white from my favourite barista. This is a type of hot beverage that we in Australia call coffee – much better than anything from Starbucks. Then again, I don’t think the stuff Starbucks sells is coffee, so it’s hardly a fair comparison.

For $8.95, I can also purchase 1.1 pint of beer in a city bar – not quite enough to make me chat up anyone who moves in a skirt, but enough to make me think I’m the funniest person in the world (my wife often disagrees … strenuously).

The point is, the opportunity cost of spending $8.95 on a fitness magazine is pretty damn high, and I expect its content to make the purchase worthwhile.

Unfortunately, the business case has so far failed to stack up.

Don’t get me wrong, I find some of the articles in these publications very useful, particularly those that relate to … you know … fitness. But in between insightful and entertaining pieces, there is a dizzying array of glitz and gloss that has nothing to do with making me fitter, faster or healthier.

Take the one that I just bought.

The cover? A good-looking woman in a bikini that looks to a weigh half a gram, standing next to a man whose tits are about to explode.

Open the magazine and the next 9 pages are straight-out advertisements, trumpeting the benefits of, among others, a particular energy drink, a certain brand of running shoes, vitamins, home gyms, supplements, more energy drinks and some cross-fit apparel (what is that? some kind of gym gear for cross-dressers?). Most of them feature some half-naked woman smiling at the reader and some half-naked man smiling at her.

Then, more advertisements, more half-naked people in ‘come and f*** me’ poses and more pictures of fully made-up models exercising but with not a sweat bead in sight.

The amount of skin in the magazine is such that I had trouble convincing my wife that I bought this magazine for the articles.

Then there is a whole crap load of pages on nutrition and cooking. They all strictly adhere to what appears to be one overriding principle: how to cook a meal without using the most delicious ingredients.

The fat bit on the meat, the skin on the chicken, the salt from the shaker and the butter from the container. All eliminated! And bacon? Why the discrimination against bacon? I have yet to see a dish in any fitness magazines featuring bacon. I see plenty freakin’ avocado crammed down the throat of every recipe. But bacon? HELL NO!

I must admit, what limited fitness-related articles this particular magazine has are very good. Even the one that showed me how to ‘Build a chest that you can be proud of … on the beach and in bed’‘ was extremely informative, even if somewhat irrelevant to a 40 year-old man who couldn’t care less anymore what his chest looks like on the beach. My wife certainly hasn’t cared what my chest looked like in bed since two kids invaded the scene.

I just wish more space in these fitness magazines is devoted to great articles penned by talented writers, rather than to info-mercial farcicals whipped up by desperate floggers.

Of course, I understand that these advertisements pay the bills and drive the profitability of these publications. However, it seems to have a reached a stage where the advertising-editorial split is so unevenly weighted that it must be impacting readership.

On the other hand, perhaps I’m missing the whole point.

Perhaps I’m just not in the target audience of these magazines anymore. Perhaps they only want readers who are titillated by images of semi-naked women, and those who appreciate the correlation between ‘sculpting the pecs’ and “landing the chicks’.

Which is a pity, because I still want to ‘sculpt my pecs’, if only to keep up with those who run with no shirts on their backs.