My dear wife was recently away in Connecticut and New York for 10 days. If you ever wanted to get as far away as geographically possible from Sydney, you go to Connecticut and New York. When she first dropped this bombshell, the woman said it was for work, that she needed to put in some “face time” with the big honchos in the head office and build some relationships. 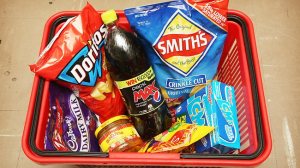 Who put all this crap in my basket?!?

I don’t know whether she realised it at the time, but she was feeding me the very same line that I feed her whenever I go away on some overseas junket. Judging by the hours she spent writing up her long shopping list, I wasn’t even sure where she was going to find the spare minute to put in any “face time” with colleagues, let alone build any relationship.

After she waved us goodbye from the taxi window on that fateful Sunday morning, my 6 year old boy L, his 4 year old brother C and I came back in the house and closed the front door. They stood there, looked at me and said “Now what do we do, Daddy“?

In a panic, all I could blurt out was: “Who wants to go to McDonald’s for breakfast“?

That afternoon, while I was figuring out how to use the washing machine to clear the overflowing laundry basket, one which I was pretty sure was empty the previous night, it suddenly dawned on me that I have to prepare the lunch box for L’s school the next day. And since his school didn’t have McDonald’s that my boy can go and order a Happy Meal from, I realised I had better go and buy some things to shove in between two bread slices for his lunch.

While at the supermarket, I was using all my powers of concentration just to locate some ham, cheese slices and bread. By the time I managed this feat and got to the checkout, unbeknownst to me, my shopping basket was also filled with chocolates, chips and biscuits. The checkout lady smiled at me, as if saying: “Do you know what you’re doing“? I nodded back and lied that we were having a kids’ party. And before I could turn around and give them a good stern talking to for putting so much rubbish into the basket, my boys were already off – off terrorising other kids on the $2 mechanical rides just outside the supermarket.

That same night, after a spaghetti dinner (topped with sauce home cooked by none other than Paul Newman himself, according to the label on the can), I put the trusty iPad in charge of the kids in the living room while I went to clean the bathroom. I was on a roll, having just cleaned the living room itself which had resembled a war zone with strewn toys everywhere. When I left them, the boys were crouched on the immaculately tidy floor, trash-talking to each other while playing a game on the tablet. When I came back to the living room, no more than 10 minutes later, I swear the two of them were crouched in exactly the same position, except the living room was now re-littered with the very same toys that I had just busted my ass putting away!

I won’t bore you with dramas of the subsequent weekdays, except to say they were characterised by chaotic morning rituals before taking the kids to school/daycare, fretting about what to come up with for their dinners while at work, and bumbling through the even more chaotic nightly routines.

It is just as well I have this forum to share the experience, especially with all the fathers who have not yet had the pleasure of this character-building test. Sharing it with the mothers on the other hand, my wife included, is not so easy. Rather than sympathy, it is more likely to generate antipathy along the lines of: “Oh, poor you, you had to spend a few measly days looking after the kids! Try doing that EVERY DAY, you inconsiderate male so-and-so“!!!

I must say, though, those kids of mine are just absolutely adorable. I already knew there was something special about those two before. But the 10 days I spent alone with them have made me even more appreciative of just how well-behaved and good-natured the two boys are. It is as if they sensed my trepidation and went out of their way to make it easy on me during the period.

Never a tantrum about all the chores and homework I demanded of them. Never a complaint about my shortcomings. And certainly never a hint of moodiness stemming from the absence of their irreplaceable mother. I am adamant that they missed her dearly, judging by the few times they wistfully listened to her voice recordings and heart achingly stared at her photos. Yet, whenever I asked them whether they were OK, the boys would always respond with the cheekiest smiles and assure me that they were.

They were simply a couple of angelic rascals who made the experience for their father so much more memorable.

It may have been my wife who went away for some “face time” and relationship-building with her work colleagues. But, without doubt, it was me who succeeded in those endeavours with my precious sons.

16 thoughts on “When the wife is away”