Last Thursday, Roger Ebert passed away in Chicago. For those who don’t know him, you may find this post to be as boring as bat-shit, perhaps even more so than my usual ramblings. 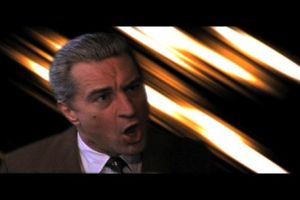 What’s the matter with you?!

I have been following Mr Ebert’s film reviews since I was in my late teens, a time when I lived and breathed movies, so much so that I was even foolish enough to have dreamt of becoming a movie director one day. Fast forward 20 years, I now live and breathe being a family man, so much so that I no longer dream of becoming anything. However, the love for films has remained to this day and so has my habit of reading Mr Ebert’s film reviews.

And this was what distracted my mind during today’s final 30km-plus training run before the marathon next Sunday. Reminiscing about many of Ebert’s critiques over the years naturally led to nostalgic recall of some of my very favourite movies. As a result, for a long stretch of the run, I was completely lost in a world of celluloid bliss. One of the exercises that I had great fun doing while on this daydreaming trip was coming up with a list of my favourite movie scenes. Here are five that effortlessly popped onto the list without much struggle:

Christopher Walken and Dennis Hopper in True Romance – Before Quentin became the Tarantino that we all now know, he wrote the screenplay for a movie called True Romance, one that gave more than a glimpse of Tarantino’s incredible talent for dialogue/monologue scripting.  And no scene showed off this talent better than the one featuring Walken as the gangster and Hopper as the father of the son that the former is hunting. Keep an eye for a goon-character in the background who is none other than James Gandolfini before he became better known as Tony Soprano.

Robert De Niro in Goodfellas – This is my all-time favourite film, directed by my all-time favourite director, starring my all-time favourite actor. Needless to say, the entire movie is a favourite scene for me. However, there is one in particular that has always stayed in my mind. It is the one where, just after De Niro and the gang have succeeded in pulling off a major airport heist, his crew members and their wives began arriving at a bar in fancy new cars and shiny fur coats. The fury that De Niro displays in this scene, worried about the police attention that this ostentatious display of loot-spending would attract, is a sheer pleasure to watch. Indeed, it may well be from this scene that “What’s the matter with you?” was immortalised as a standard phrase in any gangster films since made.

Alec Baldwin in Glengarry Glen Ross – If you want to see a movie with sharp dialogues and flawless timing between some of the best actors of our time, see Glengarry Glen Ross, a little known film that I must have enjoyed more than 20 times. And there is a scene near the beginning featuring Alec Baldwin giving a pep-talk to a bunch of down-trodden real estate salesmen – a classic speech which I am positive is still being used by real-life high-pressure sales organisations as a motivational tool.

Harvey Keitel and William Hurt in Smoke – I like action movies as much as anyone. But what I really cherish is good story-telling, especially when performed by an exceptional actor in front of a camera. Smoke is a film that is absolutely filled with great story-telling, and none presses the button just so like the one that Harvey Keitel does at the end of this movie. If that doesn’t impress you, try William Hurt near the start of the movie where he tells a story of how one can measure the weight of smoke! Then again, if you know Paul Auster, then you wouldn’t be at all surprised by all this, as the famed American author wrote the script and co-directed the movie.

Brad Pitt in Moneyball – As the risk of sounding like Kathy Bates in Misery, I am Michael Lewis’ number-one fan. So when I heard that they made a movie based on his book, Moneyball, I was nervous. The film history is littered with Hollywood butchering great books. Having now seen the movie multiple times, I am immensely impressed, not only by the whole adaptation, but also by the nuanced performance of Pitt – an actor who I never appreciated until this film. The scene in which he is attempting a trade a baseballer for one who he has been eyeing for some time, playing telephone tags and bluffing his way to get the trade done is one I don’t think I will ever get tired of. Incidentally, in the last scene of the movie, we get a gradual closing shot of Pitt’s face while he’s driving and listening to a song sung by his daughter. For some reason, and perhaps it’s because the older I get, the more sentimental I’m becoming, that closing scene always seems to touch me in a strangely emotional way. So much so that I hope to write about it in a blog someday.

So these were a few of my favourite scenes, recalled as I was running a few of my favourite routes. They may not get the thumbs-up from everyone but neither did Ebert’s reviews. That didn’t stop the other half of the famed Ebert & Siskel act from being appreciated by movie-goers all over the world, yours truly included.

So, Mr Roger Ebert, here’s to you – Rest in Peace and may your after-life continue to be filled with watching movies, and giving your thumb-ups or downs.

6 thoughts on “These are a few of my favourite scenes”