The other night, I was enjoying the movie “A Perfect Storm” in the bedroom while stuffing my face with potato chips, chocolates and a can of coke. 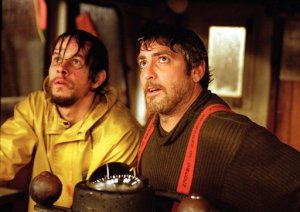 “What film is … is this that film about those stupid macho men who risk their lives just so they can catch some fish?“, my wife inquired when she entered the room.

“Honey, you obviously have no idea what you’re talking about. This film is about men versus nature and how, in this ultimate struggle, men find who they really are and what they fear“.

“What the hell? Did you just speak out of your ass? Anyway, how many time have you seen this movie?“.

I ignored that question as I was captivated for the umpteenth time by the scene where George Clooney describes to Mary Elizabeth Mastrantonio about what it feels like to venture out into the wild sea.

We then looked at each other and burst out laughing.

The reason we did is because, ever since we’ve known each other, I have regularly been typecast as gay, by outsiders who obviously don’t know me that well, as well as by my own wife who should know me extremely well.

I still remember the first job I had out of university. After about 6 months, I one day brought in a little picture frame of my girlfriend (now wife) and I, and put it on my desk. There must have been at least a dozen inquiries on that day alone from colleagues, along the lines of: “Oh, is that your girlfriend? Nice“. But the ‘Nice’ didn’t sound like the “Oh you guys look so happy” kind of ‘Nice’. Rather, it came across more like an incredulous “YOU have a girlfriend?” kind of ‘Nice’.

Perplexed, I asked one of the secretaries why people were so interested in my picture frame.

“Ha, it’s because all this time we thought you were gay”, the secretary enlightened me.

“I think it’s because your office and your desk are always so neat, and there’s never any clutter with your files“.

For someone who’s on the crass side and is known to use the F-bomb as an everyday adjective, this was indeed a shock. All the more so because most gay men I know are quite articulate and often look down upon my toilet sense of humour.

I admit, I do have a thing about being neat, so much so that it borders on being an OCD. Everything has to be meticulously structured, placed and perfectly aligned. Indeed, I have known over the years to walk into another person’s office to have a meeting, and leaving that meeting having re-organised that person’s entire desk without him/her even realising.

Not helping my cause is this strange tendency that I have of watching films of certain male actors, over and over again. Aside from George Clooney (A Perfect Storm, Up in the Air, Out of Sight), I have also conducted multiple viewing of movies featuring Brad Pitt (Moneyball, Inglourious Basterds), Leonardo Di Caprio (The Departed, Gangs of New York) and Mark Wahlberg (Ted, Date Night), to name just a few of my very favourite (incidentally) good-looking and (coincidentally) well-built actors.

In fact, the way I carry on about these actors in front of friends and colleagues frequently lead to confused looks exchanging between them, as if saying: “What’s with this guy? I thought you said he was married“?

For some people, the dead give-away apparently is the innocent casual observations that I make every now and then. For instance, if a bunch of us are in a bar and an attractive woman appears on the big TV screen who has all my friends drooling, I allegedly often chime in with a comment like: “Hey, check out her boyfriend’s shoulder muscles! How many supersets of deltoid press do you think he does a session“? At which point, I get those strange looks and weird vibes – something that I often have to dispel by calling my wife conspicuously on the mobile and loudly inquiring about my two sons.

In fact, I may have proposed to my wife much earlier than planned, in 2001, simply so as to quash the constant innuendo that has followed me during my whole early to mid-20s.

The other day, I read this somewhere on the internet:

Virgo: The bane of many Virgos is the perfectionism that can get in the way of their usual clear thinking. Along those lines, Virgos are also neat and clean. Working out is elemental for Virgo. The benefits of exercise are far more important to Virgo than the process itself. That’s why Virgos are likely to time themselves on their runs.

So, it turns out that I am just Virgo. That certainly sets the record straight and should eliminate any unnecessary conjecture in the minds of others.

From now on, whenever I introduce myself to new people, I’m going to say:

Failing that, I will make sure that I always have a photo of my wife and kids prominently displayed when I open up my wallet.

Now, if you would excuse me, I need to go and re-arrange my wardrobe, making sure all the coat hangers face the right way and that the shirts are properly hung, with lighter-coloured ones to the left and the darker-shaded ones to the right.