That was the amount of money my wife and I spent on our innocent date night a couple of weeks ago. And it came to that amount only because we snuck our two boys into my in-laws’ house and ran out before we could hear any protests. That little antic saved us at least $80 in babysitting money to a stranger, who would probably have eaten another $40 worth of my junk food stashed in our house. 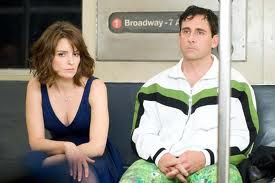 Perhaps not as eventful, but just as enjoyable!

Still, how did it add up to $129 when all we did was have dinner at a cheap and cheery Lebanese restaurant, before watching Iron Man 3 at a cinema?

Let’s see, we went first to the restaurant to eat. And because it was so cheap and cheery, I virtually ordered half of the menu. And that was just for my wife, who’s on the slender side but can eat like a rhino. I, of course, ordered the other half of the menu just so that I don’t make my wife look bad with all that food in front of her. When all the dishes finally arrived, our table looked like a Klump family dinner scene from The Nutty Professor, except devouring them was a couple who could probably both fit into Klump’s trousers.

We then lugged our bloated bodies to the cinema. That’s when the realisation dawned that we haven’t been to the silverscreen since … shit, I don’t even know when. For instance, we decided on Iron Man 3, but not before wondering when the hell did Iron Man 1 and 2 come and go? There was also a movie showing called Snitch, starring Dwayne Johnson. I looked at the poster for this film really, really closely. Wasn’t this guy a wrestler called The Rock? When did he stop acting inside the ring and start outside of it?

Anyway, we lined up to buy the tickets.

I was just about to say can we watch in 1D for less, my wife handed over the money and told me to lower my eyebrows which, by this time, were almost touching the top hairline.

Now, I’m a hopeless addict to junk food and lollies, especially those tasty little sour coke bottles. So I bought some and started to stuff my face with them. While I was doing this, my wife went to get an ice cream cone, and came back with her eyebrows almost touching her top hairline.

“Guess how much this ice cream is, honey” she asked me.

I almost choked on my little sour coke bottles, and was about to scold her for such frivolous spending when she asked me how much my lollies cost.

“Ok, honey, let’s go in and enjoy our movie, and we shall never talk about this ever again“.

But we couldn’t go into a movie theatre without some beverage, especially to wash down the ice cream and the sour coke bottles. I mean, theatres have these seats with cool-looking cup placeholders for a reason, right? So I bought a medium-sized coke. At least that’s what I thought I bought, until I found out it was a 550ml cup of ice cubes with a little bit of coke swimming around it!

I don’t remember much of the movie because I was too busy chewing ice cubes and complaining to my wife about the loudness of all the explosions on screen. I do recall, however, how mighty fine Gwyneth Paltrow looked, much to the chargrin of my better half (“Honey, I can look that good if I had my own make-up crew who …, oh wait, sorry babe, Robert Downey Jr is about to take off his shirt“)!

Finally, to cap it all off, on the way out of the cinema carpark, we got stuck in front of the boom gate. Despite my barrage of cranky-old-man swearing at the inanimate object, it refused to let us through … not unless we paid $2 for the privilege of leaving our car in the half-empty basement.

Overall, though, my wife and I thoroughly enjoyed our night out together – one that brought back many great memories of university days when we used to paint the town red, enjoying ourselves silly and without a care in the world.

A long-overdue date with just my precious lady: Priceless!

There are some things money can’t buy. For everything else, I SWEAR the whole world is ripping me off!