“So, we meet again Mr Jogging Dad. How are we this time around?” He said in an annoyingly nonchalant tone.

“Fuck off, I’m in no mood for this shit right now” I replied. 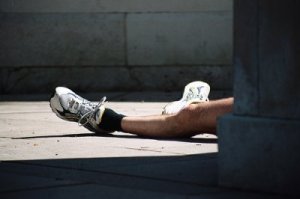 Crushed by Him, again

“I must say, you’re looking rather well, certainly better than the last time I saw you at this point. Still, looks can be deceiving. Let me just wonder insider your mind to see how you really are, shall I?”

Before I could abuse Him again, everything went silent except my own heavy breathing which, by this time, was gradually drowning out the music coming through the earphones.

Then He was back but, this time, with a much more malicious edge to His voice.

“Mr Jogging Dad, I thought you were tougher than this. But having peeked inside your mind, you’re still just the same old weakling that I crushed last time”.

“Hey, this is HARD, you know! I am in so much pain right now I’m just glad I haven’t stopped!” I feebly defended myself.

“OH, POOR YOU! Listen here, Mr Jogging Dad, and listen good. Look around you right now. Do you think there is anyone here who doesn’t want to stop right now and give up? Every one of them would love nothing more than to just collapse, lie down and hope for a mini-bus to come and scoop him or her up like a stray dog. But they keep going. Do you wanna know why? Because they … ah, fuck it, what’s the point telling you all this. YOU’RE DONE, YOU’RE FRIED. My mission is accomplished here. See you next time”.

And just like that, He was gone, but not before giving me, as a parting gift, a cramp so severe that I had to stop and stretch the excruciating knot out of my left thigh.

All this happened at the 35km mark of the marathon that I ran in a couple of weeks ago, in the Australian capital city of Canberra.

Physically I felt good, the weather was perfect for running and mentally I was geared up for the 42km of torture ahead. Indeed, things were going so well that I spent the first third of the race telling myself to slow down, pace myself, don’t try be a hero and end up being zero.

At the 14km mark, however, I suddenly felt a tinge of fatigue. As I was fumbling around in my pocket for a sugar hit, a hoard of runners literally rumbled past me. I looked up and saw that it was the 3 hour 30 minute pacing group. The sheer energy emitted as they overtook me was so strong that I felt like my body was being dragged forward by the momentum.

So without any hesitation, I decided to go with the flow and join the 3 hour 30 minute pack. For the next 18km, it was almost a surreal experience. For someone who has always enjoyed being a lone runner, this was something completely foreign, pounding the pavement with a group of strangers and feeding off each other’s energy, all in blissful silence.

Unfortunately, even these angels could only do so much for me. After I took a Gatorade at the 32km drink station, I just couldn’t summons the strength or the will power to rejoin the pack, no matter how hard I tried. As they ran further and further into the distance, I suddenly felt something that I have never experienced before while exercising, namely, a sense of utter loneliness.

And it was in that state of confused mind and fatigued limbs that I met my inner demon at the 35km mark. It was the same demon who forced me to walk for a couple of minutes during my maiden marathon, the first time I ever stopped running during a race. This time, He again succeeded in breaking me down mentally and crippling me physically.

What happened after that is just a blur in my memory. Despite the recurring cramps, I do recall telling myself to just keep running, even if it is just shuffling, because it seemed like I was being left in the dust by people twice my age, as well as those who looked a third of it.

Eventually, I did manage to cross the finish line, in 3 hours and 49 minutes – a 6 minute improvement on my first marathon but well short of my goal of 3 hours and 40 minutes. I suppose I should have focused on the positives and dwelled less on the negatives. However, being the ungrateful soul that I am, I decided to do the latter.

I was disappointed, and I chastised myself no end for so easily succumbing to my psychological nemesis once again.

That was on Sunday, 14th of April, Australian Eastern Standard time. I sulked and ached until the early morning of the following Tuesday.

Then … I found out what had happened at the finish line of another marathon at the opposite end to my world.

All of a sudden, I sulked no more. However, the aching continued, this time for a whole different reason.

13 thoughts on “When I think about you, I kick myself”