I have a  favourite running route, one that meanders along a river, through several public parks and stretches out almost 30km to a bay. At the 5km mark of this trail, there is a water dispenser to quench the thirst of anyone in need of hydration, be they joggers, riders, dog-walkers or just those enjoying the art of La Passeggiata.

Over the past 6 years running this route, I have religiously stopped at this water dispenser to have a drink, both on the way out (5km mark) and on the way back (5km from home). It has become such a  habit that my whole hydration regime on this course hinges around this little water dispenser. Not only that, it is a refreshing pit-stop on-route to a long run, and a reinvigorating one that I look forward to on the way back. 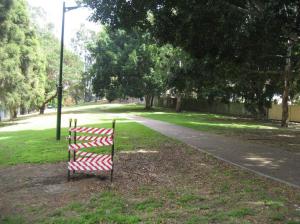 Recently, the unthinkable happened. The water dispenser broke! It was taped off limits like a murder scene – a fitting picture given the shocking and disorienting effect it had on me! I just didn’t feel quite right the rest of the run that day, nor in any of the subsequent runs since (it is still not fixed, despite many agitated calls to the council). It is embarrasing for a grown man to feel such a way over a little water dispenser but, you must understand, I depend on that thing for more than just a drink.

The other day, I went to pick up my elder son, L, from kindergarten. Whenever I pick him up, I always bring a jelly-snake as a treat. When the bell goes off and L comes down stairs from his classroom to greet me, he expects to get that jelly-snake come rain, shine or hail. It is a sacred ritual and one that he looks forward to at the end of every school day. On this day, however, I forgot to bring the little treat, as it completely slipped my mind (probably because I was still ruing over the broken water dispenser). L was absolutely inconsolable. No amount of reasoning or promises of restitution made him feel better. He was just sulky and quiet the whole way back home. In the end, I lost my patience and scolded him, telling him it was no big deal and that he should “toughen up, be a man“!

Now, I ask you – was L (an earnest 6 year-old with a meticulous personality) being irrational, or am I just the most inconsiderate and unsympathetic parent under the sun? While you ponder that question, let me call the council again about fixing that damn water dispenser!

3 thoughts on “Perils of breaking routines”