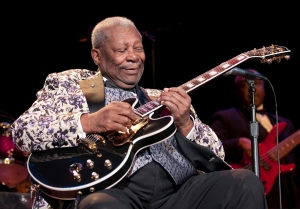 When I was a teenager back in the late 1980s, I came across a documentary featuring Eric Clapton. Clueless about these things as I was at that time, I still very much appreciated Mr Clapton’s music and especially his guitar skills. In that documentary, however, Eric Clapton said something about one of his influences being BB King. At that time, there was no such thing as the internet, let alone Google and Youtube. So I remember looking up this BB King character in the library one day, and was astounded how famous he was in the field of blues and how pervading his influence has been on the modern-day R&B.

Then … I listened to his CD (for those who don’t know, it stands for Compact Disc and plays music with the aid of a physical device) for the first time.

And immediately I was hooked.

It was not just his guitar-playing which was mesmerizingly soulful. But it was also his voice, one that made even an ignorant kid like myself at the time wonder where all that pain and emotion emanated from. BB King could have sang Twinkle, Twinkle, Little Star, but the memories of a strained childhood, suffered in unforgiving Mississippi during a dark chapter in the US, would have still seeped through.

I have been immensely fortunate to have listened to Mr King live, twice in Sydney and once in Los Angeles. Each time, the interpretation of his many well-worn songs was so sufficiently different that it made each experience positively unique. That is not something I can say about many other pop-centric concerts – all very enjoyable while you are bopping to them, but none very memorable after the bopping is over.

I remember the last time I saw BB King in the flesh. It must have been more than 10 years ago. He already looked frail by then but, when his guitar started strumming and the vocal began flowing, not even his deteriorating health could stop the soulful rhythm and blues from taking centre stage. Then, near the end of the concert, BB King did the most amazing thing. He actually gave away Lucille, his beloved Gibson guitar, to an audience member! I was not sure at the time when he started doing this at his concerts, but I do distinctly remember thinking it was a very touching thing to do.

Perhaps he was already getting used to saying goodbye to Lucille, one Gibson and one performance at a time. Perhaps he knew his time was near, and letting go of his Lucilles was one way he would be remembered, one person at a time.

I don’t have a Lucille from BB King.

And I will never get one from BB King.

But I will always remember his music and his performances.

4 thoughts on “The Thrill is Gone”

Leave a Reply to snoozing on the sofa Cancel reply