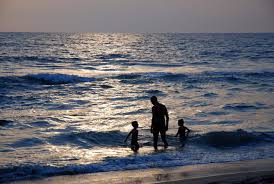 Every Saturday, I take my two boys out to breakfast at a nearby café. It has been our ‘Boys Club’ ritual ever since they were both able to walk without me having to carry them halfway, and I was able to talk without them having to ask where mummy is.

Indeed, their mummy enjoys this ritual possibly more than we do, as it gives her an opportunity to sleep in on Saturdays. This is hardly surprising after five arduous mornings of getting the two cranky little boys ready for school before she goes off to work herself in a cranky mood.

During these Saturday breakfast outings, there is never a shortage of entertainment. L and C would tell jokes to each other, argue about whose jokes are funnier, fight over who gets the last piece of bacon and volunteer each other for the last serving of salad. They would carry on like silly buggers, at times attracting the attention of waitresses who, instead of scolding them (because I’m too spineless to do so), often serves them complimentary hash browns or orange juice.

I love these Saturday breakfast outings with my boys. No matter how hung over I am from a night of alcohol-fuelled debauchery the previous day after work, I always enjoy these ‘Boys Club’ interactions with 8 year-old L and 6 year-old C. Part of the reason is that they actually behave slightly differently when my wife is not around. They just seem much more resilient when it’s just me.

For instance, whenever they fall down while chasing each other around, they know to just get up and get on with it because I would just blurt out “Toughen up, it won’t kill you”! On the other hand, if my wife was around, they would try to milk all the sympathy in the world out of her. And, believe me, she invariably obliges, making a God-awful fuss about the small scratches and forcing me to carry her little injured soldier (as she likes to call them in these situations).

My boys also talk differently when it’s just me. With their mother, L and C know exactly what buttons to push and how to push them in order to get what they want. With me, on the other hand, it’s as if they are resigned to the fact that I have no buttons or that, if there are any to push, they only blurt out: “Toughen up, it won’t kill you not to have that Minecraft Special Edition with secret instruction manuals to spawn a Wither”!

It’s gotten to a stage where L would mockingly ask me: “Daddy, can we get this new iPad app for this zombie game”?, and his little brother C would imitate my voice and reply animatedly: “NO, TOUGHEN UP, YOU DON’T NEED IT”! L would then add, in an even deeper voice: “YEAH, WHAT DO YOU THINK DADDY IS MADE OF? MONEY“? After that, they would both crack up and make more fun of me, while I try hard to suppress the urge to burst out laughing myself, lest it undermines my credibility.

But the thing that I cherish the most with these Saturday breakfasts is just seeing how much they enjoy being with me and having fun with me. And I sincerely hope that this father-son bond we have can continue for as long as possible. Maybe not as full on comical as Ben Stiller and Jerry Stiller in The Heartbreak Kid, or as serious as Marlon Brando and Al Pacino in The Godfather. But perhaps more like Martin Sheen and Charlie Sheen in Wall Street, or Danny Aiello and Edoardo Ballerini in Dinner Rush.

I once heard that, as a father, you should refrain from being friends with your sons because you have a responsibility as a figure of authority.

But if being friends with my boys means I can prolong the bond that I currently enjoy with them, then I am willing to take that choice any day of the week, and twice on Sunday.

After all, when was the last time you enjoyed hanging out with your old man because he’s authoritative and omnipotent?

6 thoughts on “The Breakfast Club”