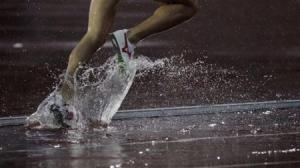 Last Saturday, Sydney was drenched in torrential rain which frequently veered sidways due to hurricane-strength horizontal winds. Trees were falling and roofs were lifting, while the occasional sound of fire engines rushing off to emergency calls competed with periodic roars of thunder.

This was an opportunity too good to pass up, given my fetish with running in the rain.

So, as soon as C went to his afternoon nap and L settled in front of the TV, on went my trusty pair of Brooks joggers and out went my ass.

About 2km’s into what I thought would be a solo run along the almost overflowing river near my place, I saw another guy running towards me through the mist. When we were in close enough proximity, we gave each other a slight nod and a quizzical smile, as if to say: “You crazy f***er! What on earth are you doing out here in this rain?“. Instinctively, we also ran around the big puddle that was between us on the running path, just as we were about to cross each other. That was , of course, a redundant move given we were both already so wet from cap-to-sock that some splash from a puddle was not going to make any difference. Nevertheless, I guess we both made the gesture, just to show some respect to each other’s insanity.

A few minutes after that, the sky really opened up. What came down from it wasn’t so much rain drops but just water falls. It pelted down so hard that my temple was beginning to feel uncomfortable from the impact, and my contact lenses were swimming in my eyes despite wearing a cap. I had to take refuge under the first big tree that I can find and when I did find it, I saw another runner already taking shelter underneath while catching her breath.

In my younger days, I would have tried to stir up a conversation in such a situation, especially as she was quite attractive. However, approaching 40 years of age with 2 kids and less than 2 years of hair left on my head, my social skills have degenerated quite markedly. I simply didn’t feel like talking. In any case, what was I gonna say? Nice weather? How’s your run going? Are you out of your mind jogging in conditions like this?

Instead, I just gave her a brief wave. She acknolwedged by waving back with a big, almost-sheepish smile. So there we were, two strangers stranded under a tree, in an absolute torrential downpour, wearing just singlets and shorts in arctic temperature, getting drenched and staring out into space – a rather surreal and comical scene which probably lasted 2-3 minutes. Eventually, we went our separate ways, she in one direction and I the other, but not before wishing each other luck.

For the next 10 kilometers or so, I didn’t see a soul, as I battled through rain, mud and wind. Then about 5 minutes from home, I saw a guy jogging out from his driveway, getting ready to go for a run. He glanced at me and witnessed my “wet-dog” appearance in its full splendor. For a split second, his expression changed from a person who was looking forward to a blissful run in the rain, to one who asked himself: “What the fuck am I doing out here?“. Then, just as quickly, his expression switched to: “If this old fart can do it, so can I!“.

All of the above observations were in my head, of course – a head filled with random thoughts while my body trudged through 20 rain-drenched kilometres. A journey which, on a normal day, would have me mindlessly runing past at least 3 or 4 dozen runners and cyclers. However, on this day, there were just three – three runners who should have had the good sense to stay indoors, but pursued the nonsense of braving the downpour.

I’ll be keeping a close eye on those foolish three from now on. I’ll be doing so for no other reason than to know that I’m not the only running weirdo in this neck of the woods.