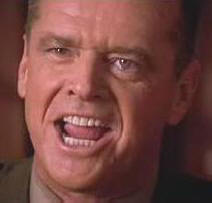 Despite the proliferation of these flash-in-the-pan phenomenons called the internet, youtube, Kindl and IOIOIO, I, the utter luddite, still watch TV quite often. So I was doing exactly that the other night, enjoying the film A Few Good Men for the upteempth time, and captivated once again by the great scene at the end when Daniel Kaffee (Tom Cruise) was cross-examining Colonel Nathan Jessup (Jack Nicholson).

It then occurred to me that that Jack Nicholson character could easily have been my 4 year-old son, C, particularly when I catch him doing something he’s not suppose to do. For example:

Me: I want my iPad back.

C: You want me to stop in the middle of Angry Birds and give you your iPad back?

Me: I need to check my email!

C: YOU CAN’T HAVE THE IPAD!!!!! Daddy, we live in a world that has gadgets. And those gadgets have to be mucked around with by kids with tempers. Who’s gonna do it? You? You, mommy? I have a greater responsibility than you can possibly fathom. You weep for yourself and you curse Apple. You have that luxury. You have the luxury of not knowing what I know: that Apple’s iProducts, while expensive and brain-frying, probably saved your sanity. Any my addiction to them, while unhealthy and reprehensible to you, saves your sanity. You don’t want the iPad. Because deep down, in places you don’t talk about at fathers’ group coffee gatherings, you want me on that iPad. You need me on that iPad.

We use phrases like “download apps”, “one more game”, “not fair” … we use these phrases as the backbone to a life spent amusing ourselves. You think of them as punchlines. I have neither the patience nor the vocabulary to explain myself to a father who eats and writes under the blanket of the very freedom that the iPad provides, then restricts the manner in which I play with it! I’d rather you just said “I give up” and buy me my own iPad Mini. Otherwise, I suggest you pick up a 1042-piece lego set and help me build a Battleship Galactica. Either way, I am not giving you your iPad back!

Me: Did you download a game without asking me first?